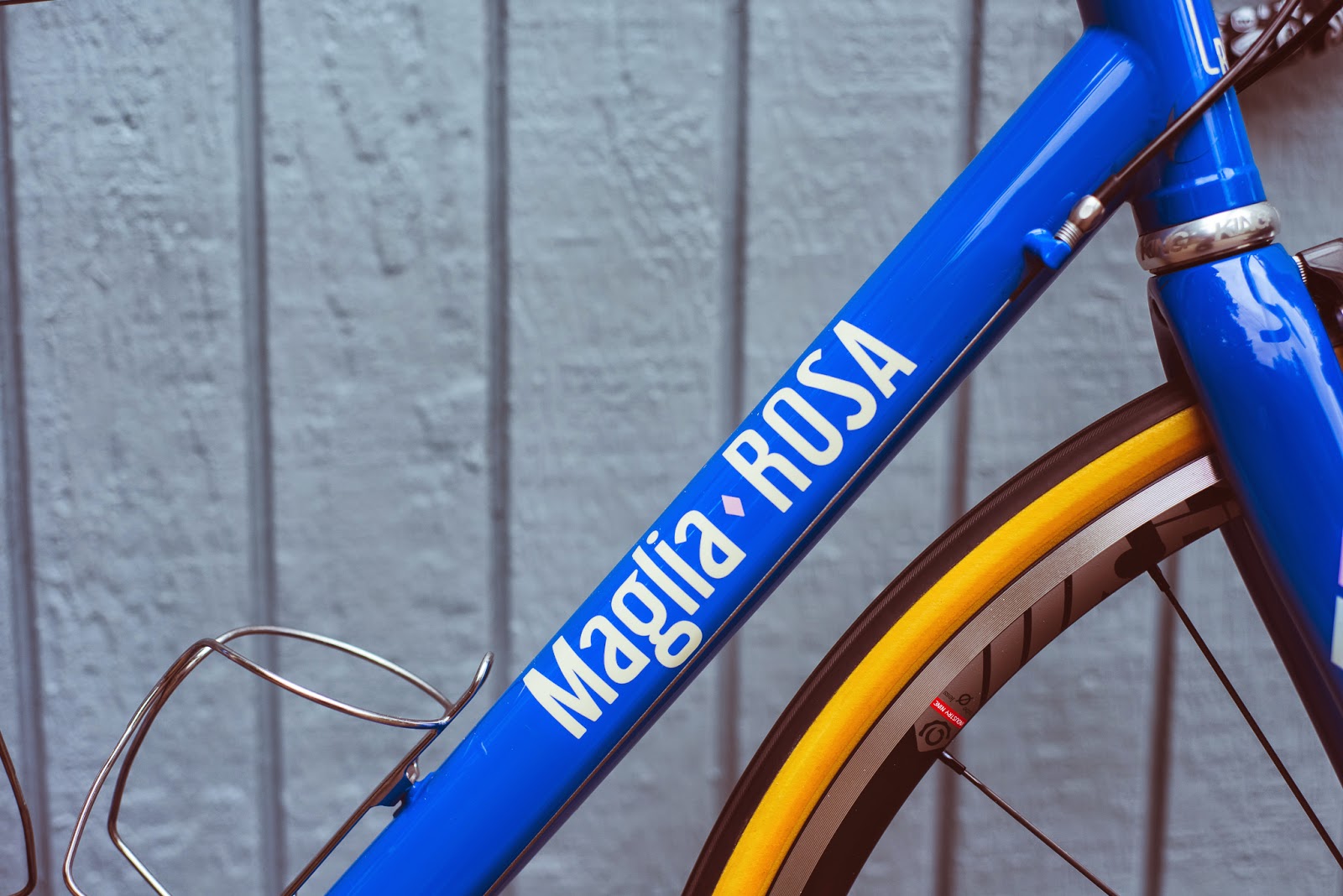 The crew at at HampCo World Headquarters – Steve, Max, Adam – are starting a new project and we’re calling it “Maglia ROSA”. Maglia ROSA translates as “pink jersey” and is historically worn by the leader of the Giro d’Italia – the Tour of Italy, pro cycling’s second most popular Grand Tour (after that one in France) and arguably a race that is more popular with the riders than the French version. Around here we say it “MAH(L)-yah ROZE-ah” but we’ll accept almost any pronunciation and sort of promise to not snigger when it gets butchered.

And, of course, there’s brother Andy, co-owner of Hampsten Cycles, who is still the only American to have worn the maglia rosa as the winner of that illustrious race, way back in June of 1988. Andy’s win of the Giro is definitely part of the DNA of this project. For a great read on the Giro, we strongly recommend Herbie Sykes’ book Maglia ROSA.

Initially, Maglia ROSA will consist of few non-custom models that will be different from the frames we currently produce. Some Maglia ROSA models will be outsourced and some we’ll fabricate on our own. We’ll be focusing on two materials for Maglia ROSA: steel and carbon. Steel we love for it’s smooth ride, old-school sincerity, sexiness under paint, and we enjoy working with it. Carbon is a material we haven’t explored as much as we’d like but we know we enjoy the comfy ride and light weight that carbon provides and it seems to be popular these days. We’re saving titanium for our custom builds and we’re not working with aluminum as a frame material right now.

Here’s what we’re starting with:

Superissimo. Yes, the name is cribbed from Casey and his site of the same name. He did the graphic design work for Maglia ROSA and we owe him many thanks for his clear vision, great ideas, and complete lack of screwing around. (Ok, Ernesto did a lugged frame back in the 1980s with the same name but we never felt that his heart was really in it.)

This frame features Columbus Spirit HSS shaped top and down tube, MAX chainstays, Spirit seat stays and Life seat tube, Paragon PF30 BB shell and our own D-11-sized head tube. We’ll offer it with a Falz carbon fork, King D-11 headset and King PF30 BB. Current paint choices are Squadra Azurra (shown) and Verdigris. The price is $2850. We’ll have a size chart posted soon, and we’re putting a 190# weight limit on this baby. These are built to order and will take a few months, etc.

Il Carbonario. From Columbus Tubi and ADK Technolgy comes the Columbus Genius carbon frame which we sprinkle with magic Maglia ROSA dust, add an Enve 1.0 tapered fork, sexy-up with our own paint and decals and, voila! – Il Carbonario. No, we didn’t make it ourselves and yes, it comes from a country where one might have noodles-not-pasta for lunch but we’re impressed with the quality of the frames we’ve seen from ADK and the fit, design, and geometry of this frame is right on the money – thanks, Columbus! If you’re looking for a light/strong/comfortable carbon racebike that won’t break the bank but will provide a good alternative to all the GianTrekalized bikes out there we think you should be on this. In limited sizes and availability, two colors – $2600.

A nice photo from Pal Darren