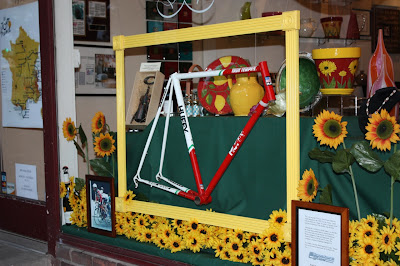 Come see a piece of cycling history at SPLURGE Unique Gifts and Home Décor in Greenwich, CT: an actual frame ridden by American cyclist Andy Hampsten in the Tour de France, as a member of the ground-breaking 7-Eleven cycling team!

Partnering with Signature Cycles of Greenwich, CT, the unique window display for the month of July celebrates the 96th edition of the Tour—surely one of the most dramatic in recent history. Built by Serotta and branded as a Huffy, the frame is a special piece of sports history, ridden by one of America’s greatest cyclists.

Be sure to visit SPLURGE and enter a free drawing to win the legendary Campagnolo “Il Cavatappi” corkscrew, courtesy of Signature Cycles. Also, visit Signature Cycles in Greenwich and register to win a $100 gift to SPLURGE!

Hampsten’s rookie season in the European pro cycling theater began in 1985 as a member of the 7-Eleven squad, and included a legendary stage win at that year’s Giro d’Italia. Several years later, he was the first American to win what is arguably the crown jewel stage of the Tour de France: the climbing stage of L’ Alpe d’Huez. He also finished 4th in general classification in that 1992 edition, solidifying his place among cycling’s elite.

“We are thrilled to present a unique and fun display for Tour de France fans of Greenwich and the surrounding communities,” says Sonia Sotire Malloy, owner of SPLURGE, adding, “Also, from July 23rd through July 25th, we are donating 10% of store proceeds to a wonderful charity, www.ichallengemyself.org, which provides athletic and educational programs for deserving children in NYC.”

On July 25th, a group ride will leave the Signature Cycles Greenwich showroom at 28 Bruce Park Avenue (approx. one block from the Greenwich Metro North station, near Greenwich Avenue) at 9:00 a.m., and ending approx. 2 hours later at SPLURGE Unique Gifts and Home Décor (at 19A East Putnam Avenue—approx. one half block east of the top of Greenwich Avenue), where riders and friends will enjoy complimentary coffee, refreshments and post-ride treats.